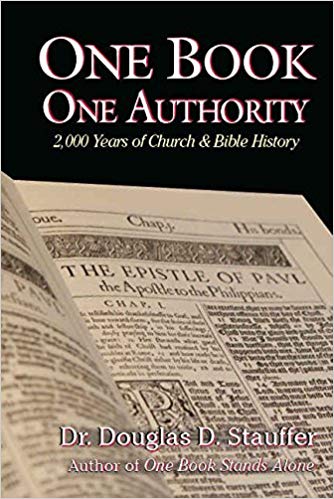 One Book One Authority

In this companion volume to One Book Stands Alone, the sincere Bible student can acquire a working knowledge of the contemporary challenges directed at the most revered book in human history. In spite of the myriad of modern version bible choices, readers will gain extraordinary confidence to support use of the King James Bible. Along with building a spiritual storehouse of reinforcements for regular consultation, the reader will find greater insight into the history of God’s word, God’s people and their mutual adversaries.

One Book One Authority,much like its predecessor, is not a book that you will read once and relegate to the shelf to collect dust. If you are committed to loving and living God's word, you will want to keep its many resources easily accessible. Use it to help you:

These points represent a sampling of the material covered by One Book One Authority. It is imperative that Christians today rediscover the emphasis God places upon believing and trusting His written word. Sadly, Christians have forgotten the parallel between the written word of God and the Word manifested in the flesh. Both the incarnate Word and the written word provide a direct revelation from God, as well as a direct revelation of God. Without the incarnate Word, man could never have an intimate relationship with God; without the written word of God, man would never know about this relationship. God’s written word reveals the benefits of Christ’s redemptive work, otherwise forever hidden.

Unfortunately, Christian young men seeking a Bible education are no longer taught the infallible word of God, but are instead encouraged to question its language and history and to doubt the very utility of preaching the word. This book serves to thwart the presumptuous actions taking place in the name of religious scholarship. The typical seminary’s approach to the word of God would be unacceptable in the studies of science, medicine, law or any other secular field of education. Yet, Christian training enterprises, once conceived to implant a sense of reverence for the word of God, are now producing the opposite effect.

Seminary students should have an intimate relationship with God and graduate with a renewed reliance upon that bond. They should equally trust in God’s infallible word. Regrettably, too many of these otherwise promising young minds graduate overconfident in their education and with an unhealthy loyalty to their alma mater. These graduates then infiltrate the churches where they become judge and jury over the word of God, rather than expositors and exhorters of God’s treasured possession. One Book One Authority is intended for the man or woman who has grown frustrated with the uncertainty and unbelief so prevalent today. It serves as a treatise against the modern-day seminary education and the majority of books found in 21st century Christian bookstores. This book brings the word of God and the Word incarnate into perspective by simultaneously elevating both to their rightfully exalted positions.

One Book One Authority
By Douglas Stauffer
Available as a Hardback.