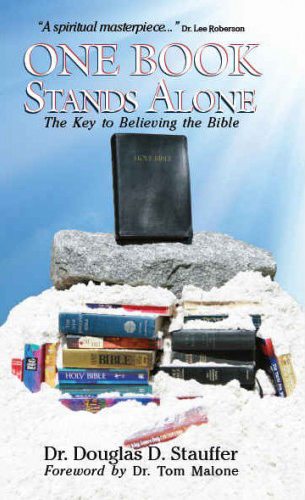 One Book Stands Alone tackles the most pressing theological debate of our time—identifying God’s preserved word in the English language. Unlike many of the controversial and sometimes caustic works in this area, this book conclusively pinpoints the present battleground and spiritual combatants of the 21st century.

As a result of his “success” in the Garden of Eden, Satan has unrelentingly posed his familiar “Hath God said” question to every generation. Unfortunately, his query has frequently accomplished its designed purpose, undermining one’s faith in God’s word and causing division between the Creator and His creation. One Book Stands Alone identifies the counterfeit authorities guilty of giving an uncertain sound. The reader will quickly discover how to recognize Satan’s multi-pronged attack aimed at:

One Book Stands Alone
By Douglas Stauffer
Available as a Hardback.